Did I get my full wages in my last paycheck?:  Part 2 – Piece Work 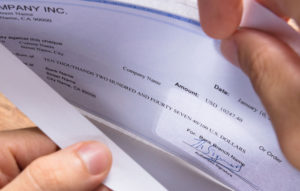 Some workers are paid not by the hour but by the pieces of work they produce.  Pieceworkers are not common, but some employers do pay workers in this manner. Piecework pay might be found, for example, in a manufacturing shop where the employer has more orders for a product than it can produce in a single shift but not enough to justify two shifts. So, the shop might set up one standard 8-hour shift for most workers and then let a couple of the workers produce product on their own time, either at the shop or at their own homes or in their own garages.

As we noted previously on this site, most employees are covered by the provisions of Labor Standards Act which sets the current federal minimum wage at $7.25 an hour.  How are the wages of pieceworkers calculated to determine whether their pay meets the minimum?  To answer the question the employer will need to know the per-hour production rate, of course.  Then the employer will apply the formula set out in the regulation of the U. S. Department of Labor, codified at 29 CFR §778.111.  The regulation can be accessed at www.dol.gov/whd/regs/compliance/wh1262.pdf

Fundamentally the regulation requires of earnings for the workweek divided by the number of hours worked in the week.  This gives the gives pieceworker’s “regular rate” for that week. Overtime pay is then calculated at one-half the regular rate multiplied by the number of hours worked over 40 in the week.  Note that, since “time” has already been compensated under the formula, only “and-a-half” is then added to arrive at the correct overtime pay for the week.  The regulation gives this example:

Notice that, in order to make the calculation, the employer must know the number of hours worked by an employee and the production levels during both the regular shift and the off-shift work.  Thus, the employer will have to keep records of times worked. Employers who fail to keep the required records may find that they face substantial record-keeping fines under the USDOL regulations at 29 CFR Part 530.  Employees who fail to keep their own records of hours worked after the regular shift risk losing overtime pay to which they may well be entitled.